I love it when Amazon recommends something that actually interests me. It doesn’t happen often. But every once in a while the online merchandising giant flashes something before me that makes me go, “Ooooh.” 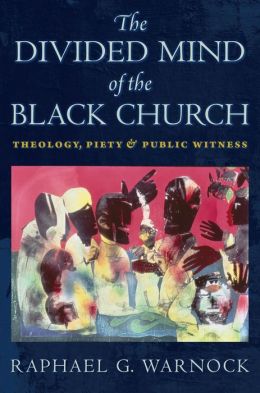 That was the case with the release of Raphael G. Warnock’s new book, The Divided Mind of the Black Church: Theology, Piety and Public Witness. Warnock serves as senior pastor of the famed Ebenezer Baptist Church in Atlanta, Georgia, the church where Dr. Martin Luther King, Jr. once served. This first publication from Warnock attempts a missiology of the Black Church by putting Black Theology, the Black Church, and Womanist theologians in conversation.

Warnock lays the book out in five chapters following an introduction:

The chapter titles reflect the dialogical nature of the book, as Warnock allows each sector to engage and critique the other in the hopes of fashioning an integrated whole.

Strengths of the Book

Readers will be stimulated and helped by several strengths of the book.

First, Warnock raises the correct questions. “What is the true nature and mission of the church? As a community formed in memory of Jesus Christ and informed by the gospels, what is it that makes it a faithful and authentic witness, and what exactly is it called to do?” (p. 1). It’s difficult to imagine more foundational and important questions to engage. Moreover, Warnock attempts to situate those fundamental questions in the context of the Black Church and African-American experience. He wants to hold together what he calls “the memory of Jesus” with the “distinctive resonance [that occurs] when the church is one built by slaves and formed, from its beginning, at the center of an oppressed community’s fight for personhood and freedom.” He’s not writing abstractly or without regard for context. He’s attempting to answer these questions where the Black Church lives, or has lived, and that creates good fodder for discussion.

Second, Warnock raises provocative insights about what he calls “the double-counsciousness of black Christianity.” That double-consciousness is “profoundly shaped by white evangelicalism’s focus on individual salvation (piety) yet conscious of the contradictions of slavery and therefore focused on sociopolitical freedom (protest),” (p. 2). Here, Warnock manages to hold together what many other Black theologians have either downplayed or lost altogether—a view toward individual salvation through faith in Christ and a view toward active sociopolitical engagement. That’s a real contribution in a discourse where participants that largely talk past one another and rarely attempt holding “piety” and “protest” together. This synthesis allows Warnock to come down squarely on the side of saying the mission of the black church is both the salvation of souls and the transformation of the social order. He sees the church addressing both “the slavery of sin” and “the sin of slavery,” though he argues that “the black church has had a divided mind which in turn shaped its ambiguous history” (p. 4). For Warnock, difficulty holding together the “pietistic” and “liberationist” strands of African-American Christianity lies at the center of the black church’s divided mind. Those who care about the vibrancy and effectiveness of the Black Church do well to acknowledge this tension and its consequences when poorly resolved or handled. The stakes are high. As Warnock points out, “this ecclesiology of personhood expressed in its piety and its politics is, more than anything else, the single, unifying strand holistically setting the black church apart as the conscience of American churches” (p. 14).

Warnock frames these four movements also as (1) Christianization, (2) institutionalization, (3) conscientization, and (4) systematization. Much of the argument of The Divided Mind of the Black Church depends on Warnock’s framework. This reading of history makes combatting racism and “holistic salvation” central to the narrative of the church’s development. It’s a resistance narrative. It evaluates the church and figures in the church’s history against this objective.

Fourth, Warnock offers a trenchant critique of any form of Christianity that does not have a robust sense of social justice. Like Douglass centuries ago, Warnock took aim at slaveholding Christianity. He writes, “the task of so-called Christian slaveholding society became the construction and maintenance of a distorted theology that kept internal freedom and external freedom—piety and protest—wholly separate, while also holding at bay the revolutionary implications of each for a people in bondage” (p. 23). This, according to Warnock, sets Black and White Christianity apart from one another. For “the peculiar genius of slave religion… [was that] the two were held together in tandem and in a remarkably creative tension… [such that] slave religion actually evinced an oppositional piety” (pp. 24-25). That “oppositional piety” represents a genuine internal or spiritual dynamism combined with a creative and resilient social engagement. Christianities lacking this dynamic are fatally flawed.

You can hear Warnock address the theme of the book here in this Chatauqua Institution lecture:

I enjoyed reading Warnock’s The Divided Mind of the Black Church. It deserves serious reading and interaction, and I trust it will prove to be a valuable contribution to the field. But the book has some significant limitations.

First, the four movements that Warnock uses to frame Black Church history and engagement is a framework from outside the movement itself. In other words, it’s a framework imposed on this history, developed by the author, and not derived from the history. Consequently, it suffers the weakness proposed by other writers like Gayraud Wilmore and James Cone: a bias that makes one’s political orientation the criteria by which the history and persons are judged. So, Warnock reads periods where the Black Church seems politically inactive or accommodationist as departures from its “true” liberationist character. It seems better to simply admit that the church is big, diverse and growing rather than pidgeon-hole it into one value over all others. Then we don’t have to conclude, as Warnock does, by saying “the black church has been both radical and unradical, the prominent instrument of liberation within the African American community and the foremost conservative custodian of an uncritical evangelical piety that undermines the aims of liberation” (p. 29). Here he risks undoing the very synthesis of piety and protest he admirably articulates in the book. He risks downplaying evangelical piety until it’s subservient to “liberation.”

Second, the book needs a biblical definition of liberation. For Warnock, liberation appears to be a rather expansive concept, including liberation from sin and liberation from sociopolitical oppression and even liberation from sexual norms. This is most telling in Warnock’s call for GLBT equality and his push-back against gender roles in the church. At these points a right concern for justice gets transmogrified by a human rather than biblical definition of justice. And this is where Black Theology’s promise tends to fail so often. Black Theology raises important questions but fails to answer them biblically. Piety always loses to protest. Thus protest and piety lose.

Though he makes room for both “piety” and “politics,” Warnock seems to side more fundamentally with sociopolitical liberation. In that sense, he makes more of the Black Church’s sociopolitical situation and needs than he does “the memory of Jesus,” to use his phrase. I suspect the Lord Jesus would insist on reversing that priority. He must be worshipped as Lord and His gospel proclaimed even by captives who don’t yet know freedom. That’s part of our history, too, and it’s no capitulation or betrayal to recognize and honor it.