The Survival of Your Church May Depend on Its Membership Practices

In August, the Rev. Tim Mattox and several members of the congregation acted to remove from membership and bar the Ms. Genora Hamm Biggs from the church’s services and property. Ms. Biggs (who is 103 years old!) had been a member of the Union Grove Baptist Church for 92 years. In recent months she vocalized her concern and criticism of Pastor Mattox, calling his preaching style “Pentecostal” rather than “Baptist.” After some time, the pastor and members responded with excommunication.

The troubles at Union Grove Baptist Church provide an object lesson for every local congregation—members and pastors. Here are a few:

1. Don’t Mess with the Old Ladies in the Church

Honestly, that’s pastor survival 101. Picking a fight with older members is doomed to failure. Especially if that older member has her name, along with the names of five other family members, listed as “secretary” on the current building’s memorial or dedication stone. It’s even listed before the then-current pastor’s! That’s a bad fight to pick! 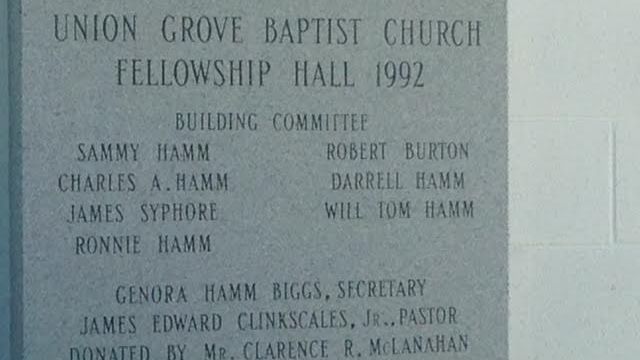 Ms. Biggs is listed as “secretary” on the current building’s dedication stone.

The older saints can be pretty settled in their ways. And though no pastor needs to comprise to the point of unfaithfulness to Jesus, he ought to have a lot of respect, patience and even deference to older members of the church. Indeed, every pastor should be more concerned about helping the older members ready themselves to meet Jesus and enter eternity with as much joy as possible with the lives they have left. We pastors have to remember the God-breathed instruction: “Do not rebuke an older man but encourage him as you would a father…older women as mothers” (1 Tim. 5:1-2).

2. Church leaders sometimes win or lose their congregations by their manner rather than their position.

Every pastor knows or will soon discover that opposition is part of the job. There’s Satanic opposition, the world’s rejection, and sometimes the snipping and biting of sheep. If we are faithful in following Christ, we shall encounter hardship and resistance.

But the difficulty of facing opposition gets multiplied by the Bible’s instruction on how to face it. Peeped 2 Timothy 2:24-26 lately?

24 And the Lord’s servant must not be quarrelsome but kind to everyone, able to teach, patiently enduring evil, 25 correcting his opponents with gentleness. God may perhaps grant them repentance leading to a knowledge of the truth, 26 and they may come to their senses and escape from the snare of the devil, after being captured to do his will.

The Lord’s servant doesn’t get to strike back. He must be kind, patient, gentle as he teaches. And he must do this keeping in mind that the opposition he faces is in fact a spiritual war against Satan’s influence in which he wars not to be “right” but to save the very one opposing him. We pastors lose if we grow impatient, quarrelsome, mean, vindictive or ruthless. If we punish, we fail. Our effectiveness in overcoming opposition has a lot to do with our demeanor.

Seems I’ve heard this story a hundred times. The leaders attempt to take the congregation in a desired direction, some minority of folks grow disgruntled, then at a members’ meeting people the leaders thought were long-gone and maybe even dead show up to vote them down and sometimes vote them out. They’re like the “undecideds” in American politics, those swing voters who finally get energized and cast their vote with the people who stirred them from their slumber.

How do you prevent this from happening? Before you attempt any changes, first get to know the active members of the church. Then, in an attempt to love those once in the fold, go seek the sheep who no longer come to service but remain on the roll. Before there’s ever a conflict to resolve, be the guy who called when others had forgotten, be the guy who visited even when the member has moved several times, be the guy who invited them back though they’d long ago grown too awkward to come back. Do all this while teaching the congregation the importance of belonging and participating in the family of God, given the active members a vision and sense of the privilege that comes with belonging to the Lord’s church. Then when all those attempts at gathering lost sheep fail, as a congregation update the membership roll.

Once you have a church defined and marked off, then you won’t have to worry about long inactive “members” showing up to veto a necessary development or change. Then you can begin to teach the congregation the various things the Lord through the scripture wishes to improve in their lives.

4. Neither covert nor coercive change will last.

There are no perfect churches. Period. Full stop. None. All our congregations comprise wheat and tares. All of our local bodies have blemishes, weaknesses and sins. So, in some sense, every congregation needs to be continually reformed by the word of God. A good, honest pastor and church member knows that.

However, such reform cannot and must not come through cloak and dagger. If it’s true that Pastor Mattox attempted to secretly or coercively introduce changes foreign to Baptist history, polity, and practice, then Ms. Biggs correctly challenged the changes as deceptive and inappropriate.

Even if his changes were good and he could effect them in the congregation, if the congregation did not understand and own the reforms it’s very likely they would slide back to their old ways after Pastor Mattox left or call a pastor with very different convictions. Reforms don’t last when the people don’t understand and embrace them.

5. Church discipline is a heavy club meant to be used sparingly and redemptively.

The good folks at 9Marks and Southeastern Baptist Theological Seminary just held a conference on church discipline. If you haven’t thought much about the importance, motive, and practice of discipline, I heartily commend these sermons to you.

But in a nutshell, Union Grove Baptist Church seriously erred when they resorted to discipline with no view towards reconciliation and redemption. Ms. Biggs may have been a disruption or even divisive, and perhaps she misunderstood some important issues, but our Lord gives us corrective discipline as a means to win and restore people not silence or punish them.

6. The membership may not always be right, but they always have the right.

I believe the congregation as a whole is the final authority in the local church. Baptists have held this since the beginning of the movement. When it comes to calling pastors (Acts 13), church membership and discipline (1 Cor. 5; Matt. 18:15-17), the final and decisive actor is the membership.

Now, that’s not to say the membership always has it correct. They may fail to submit to the leadership of the elders (Heb. 13:17) and they may judge an issue incorrectly, thinking themselves generous when they should be aghast (1 Cor. 5). The congregation may not be right, but biblically they have the right and responsibility to act in these matters.

It’s messy. Ms. Biggs and her followers could be faulted for a variety of missteps and inappropriate attitudes and behaviors. Meanwhile, Pastor Mattox and his crew appear to have made their share of mistakes. Our polity determines who gets to be “right” when everybody has committed some wrongs. Being clear on this question goes a long way in preserving authority as well as protecting unity.

Most people think polity is unimportant until they really need it in a crisis. It’s generally too late then. The wise pastor and congregation work out their biblical convictions regarding church governance before some messy situation produces pain in the body.