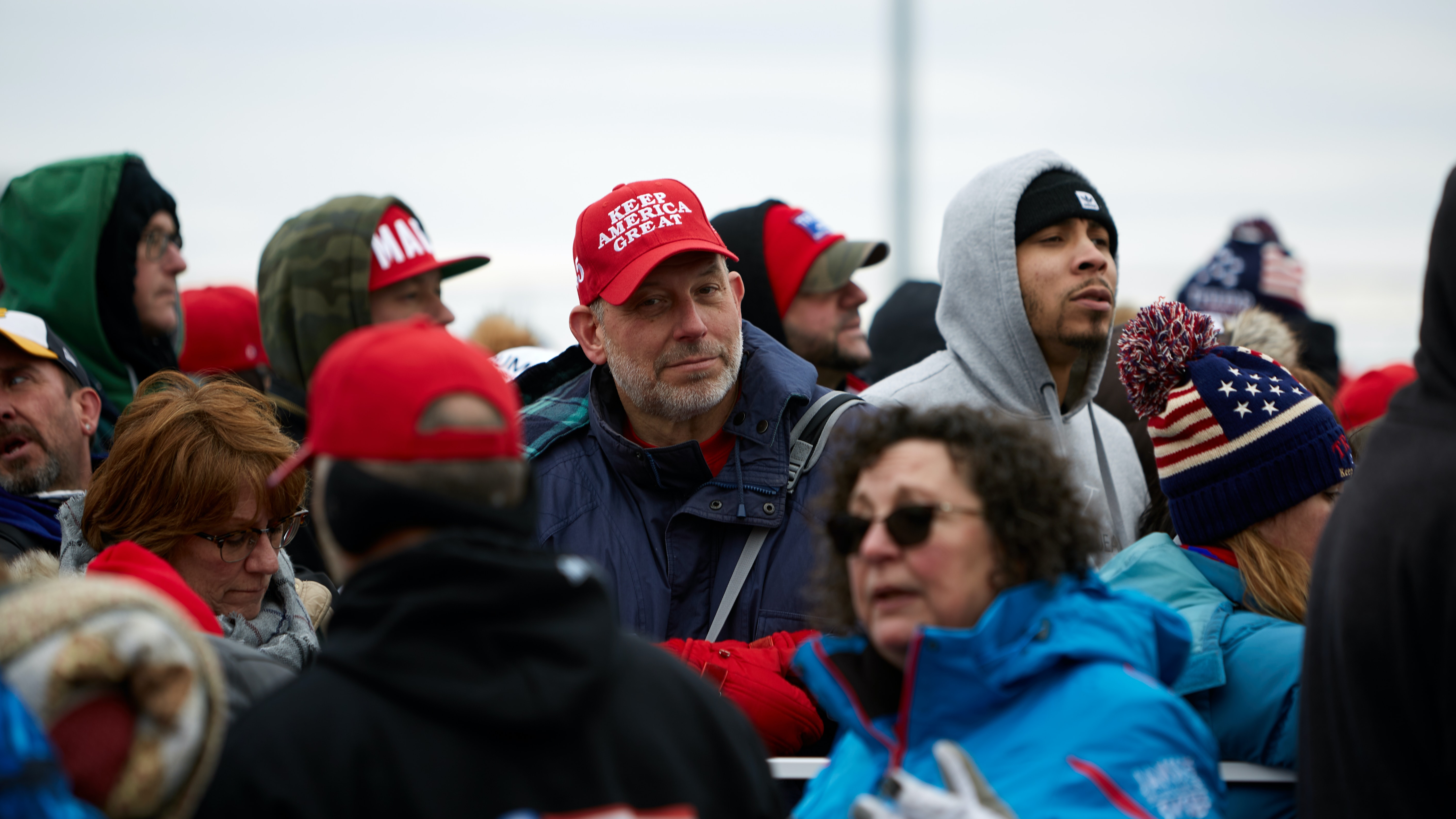 Not a full week into the new year, a mere six days after bidding good riddance to 2020, we were all thrown into a fresh hell, watching in horror as an insurrectionist mob overran the U.S. Capitol. Five image-bearers died in the fray. If that were not disturbing enough, grievous still was the sight of handmade signs bearing the words, ‘Jesus Saves’ and ‘Jesus 2020’ intermingling with the Confederate Battle flag and the Trump flag. The world looked on in disbelief as the riotous mob not only befouled the Capitol, but also blasphemed the very name of Christ.

All of this happened on Epiphany, traditionally recognized on the liturgical calendar as the day Christians celebrate the revelation of God incarnate in Jesus Christ to the world. Yet the revelation to the world, as evidenced on the front page of Al-Jazeera, was one of Christian insurrectionists carrying a cross up the steps of the Capitol, praying while wrapped in the Trump flag. It is an image of the American church, a church that has sold her gospel witness for a porridge of power. A people of truth, who serve the One who is Truth, have cowered to alternative-facts and borne false witness.

But this image of American Christian nationalism demands repudiation and it bids believers declare, clearly, and unequivocally, that this is a false religion, a false gospel, a false faith. Christian nationalism, with Trump as savior and political conservatism as religion, is not the faith entrusted once for all to the saints (Jude 1:3).

The incredulity and shock about Wednesday’s national ignominy is itself telling, and the statements of bewilderment are themselves infused with religious overtones:

‘This is not America.’

‘I can’t believe this is happening in our country.’

‘America is better than this.’

Setting aside the ahistorical assertion that this is not America (see, for example, the overthrow of democratically elected governments comprised of black republicans by murderous white supremacists in the aftermath of the Great Betrayal of 1876, such as was seen on Nov. 10, 1898 in Wilmington, N.C), these statements communicate a civil religion of American Exceptionalism.

It is as if the U.S. is so exceptional as to be free from the corrupting influence of sin in its institutions and among its people. January 6th dispels that fevered myth, revealing the depth of our depravity and the divisions in our union. January 6th is the result of us having imbued our political discourse with transcendental language and drawing lines of orthodoxy around party ideology. January 6th is the result of our erstwhile political contests having become apocalyptic campaigns of war.

This is the problem we are now confronted with: our body-politic divided, our national comity broken. What then is the solution? How do we arrest our downward slide? How do we bridge our chasmic divisions and climb out of the barrel of partisan antipathy?

The only way out of our long decline, is either, as New York Times columnist Ross Douthat wrote, revolution or religious revival.[i]

The raging mob of January 6th think themselves revolutionaries, restoring America to its greatness. But what we saw was less a noble cause and more the wickedness of a tyrant and those who bow to him. Besides, the medicine for our national malaise is not revolution. Revolutions – cultural, sexual, political – have proven inadequate to meet our deepest need. We need revival and renewal; we need a new awakening.

But since so many of our national leaders, political and religious leaders, have failed us, from whence shall this revival and renewal come?

Much has been said and written about how white evangelicalism is in thrall to the GOP, but the data actually shows that most of the partisans and so-called Christian nationalists we see in the public sphere are not regular attendees of the local church.[i] They are cultural appropriators of Christianity at best, and outright charlatans at worst. The numbers bear out the fact that most regular church attendees, who routinely sit under sound preaching and teaching, are far less partisan, are more engaged in their community caring for the poor, the alien, the widow, the orphan, the disenfranchised, and the marginalized, more frequently interacting with different ethnic groups, and readily engaging in the work of racial reconciliation.

This is the way. And I can testify to its veracity because even in this past week, in my little corner of the country in the capital city of Florida, I have been blessed by three different pastors of three different local churches who are engaged in this work of building virtuous citizens. And their people are being shaped by the faithful preaching and teaching of truth and by the modeling of servant-leadership. The fruits of their work are evident in the unity, love, and self-sacrifice of their people. In the midst of the rancor that surrounds us, it is succor to see the local church proclaiming truth, engaging in the work of building the Kingdom of God and seeking the welfare of the city (Jer. 29).

Pastor Tim Trask of Woodland Hills Church is currently leading his church through the Lord’s Prayer as the model for praying for justice in our community, and the congregation is actively interceding for justice on behalf of the oppressed and marginalized. Pastor Taylor of Incarnation Tallahassee will be leading his people through a series on the book of Lamentations, calling his people to lament deeply for the injustice, division, and brokenness of our society while daring them to yet hope in the loving-kindness and faithfulness of God. Pastor Josh Hughes of Four Oaks East, my own pastor, is leading our congregation through an expositional series on biblical justice while casting a vision for how we can programmatically join with local community leaders in promoting economic, educational, and legal justice in our city.

These local pastors in local churches are shaping virtuous people, and, in ways both big and small, are maintaining the bonds of fellowship in our community while keeping the torrent of evil and nihilism from completely overtaking us all.

Now of course some may cynically say that the above is mere anecdote, and the plural of anecdote is not data. Yet I see more pastors and churches doing the work of building virtue, and it is evident more still are needed. We need less partisans in the pulpit and more pastors shepherding the people, modeling Jesus Christ’s servant-leadership, equipping people to be salt and light in their communities, and continuously pointing us to Jesus, the only One who saves.

The irony of January 6th is that in the thicket of rage and hearts darkened by lies, the light of truth yet found a way to peek through: Jesus Saves. But he is not the Jesus of white nationalism or Trumpian conservatism. Jesus will not be co-opted in pursuit of power; he rules and super-rules over all earthly powers, presidents, and potentates. Jesus will not be your ideological or cultural signpost; his ways are counter-cultural and upside-down. Jesus is not for feckless tyrants and wealthy influencers, he is for the meek and lowly. You did not vote him in, and you cannot vote him out. His reign is not aligned with any political party, and is not for any biennial or quadrennial cycle. He is enthroned forevermore.

[i] Ross Douthat, The Decadent Society: Howe We Became the Victims of Our Own Success. New York, NY: Avid Reader Press, 2020.

[i] Geoffrey Layman, “Where is Trump’s evangelical base? Not in church.” The Washington Post, March 29, 2016. https://www.washingtonpost.com/news/monkey-cage/wp/2016/03/29/where-is-trumps-evangelical-base-not-in-church/

Funmi Ojetayo is a practicing attorney in Tallahassee, Florida and a student at the Southern Baptist Theological Seminary. He is a pastoral intern at Four Oaks East in Tallahassee and is honored to serve local churches in his city through the ministry of preaching and teaching. The greatest honor of his life is to love and serve his wife, Abena, and to be a father to their three children.

© 2021 The Front Porch. All rights reserved. | Designed by jondoulos