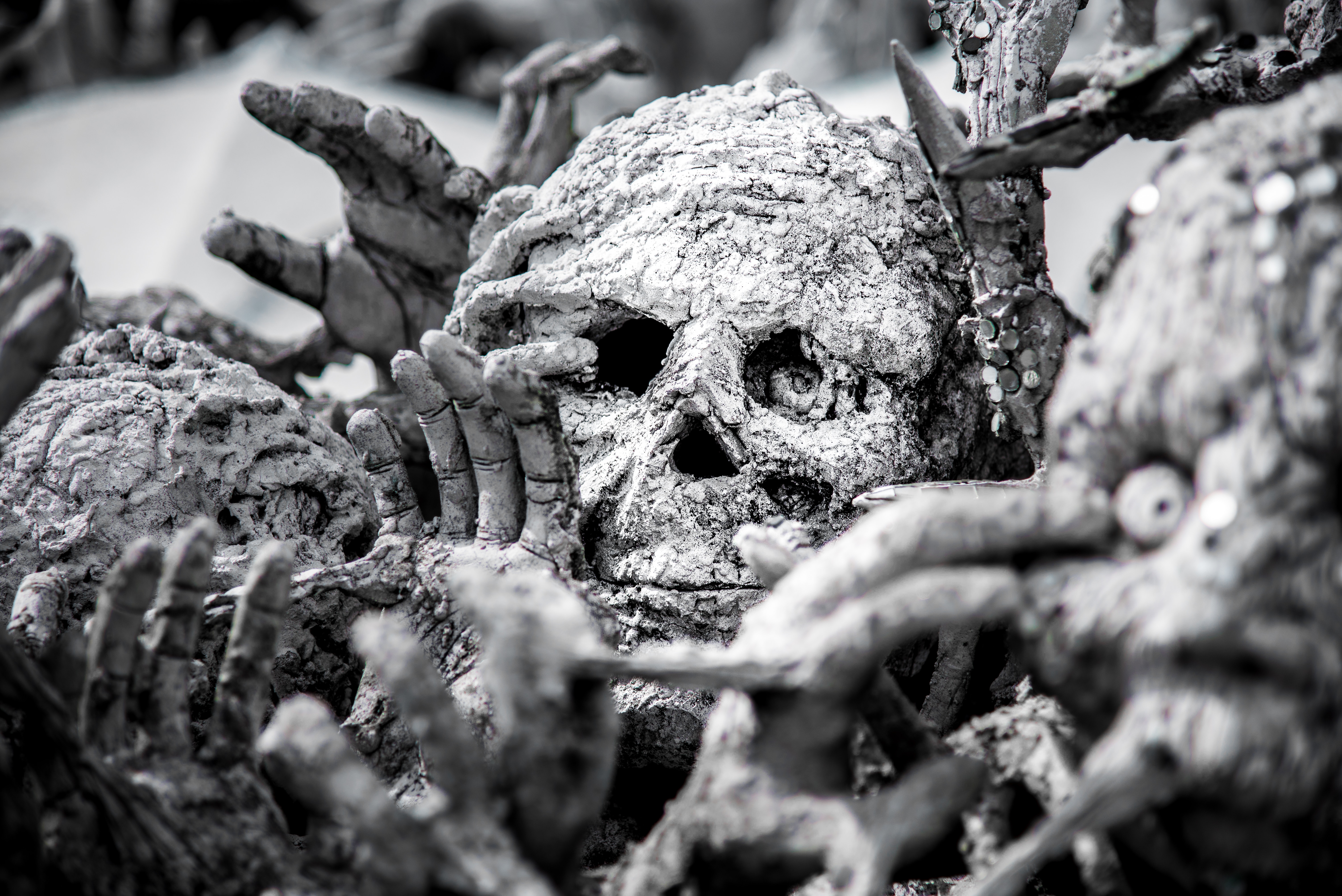 A Hound of Hell

Editor’s Note: This is the first in a four-part series exploring “the seductive nature of white supremacy” and Black Christian identity and faith.

“Like a drowned man, Floyd’s lungs were filled with fluid. That was the obvious reason he couldn’t breathe.”

“I don’t think people are going to like the verdict this is heading towards.”

“If they overcharge the case the guy will get off and it won’t be the ‘system’ [at fault].”

“Take the win by charging the guy with manslaughter. Justice will have been
served.”

Still organizing from a recent move, I managed to put together a makeshift desk in what is now my daughter’s nursery. The “desk”– assembled using storage boxes– was to be my workstation as I prepared for the start of my graduate program. Instead of transporting furniture across the country, my wife and I chose to furnish our home upon arrival. Until then, we would have to make it work, sleeping on the floor on a newly bought mattress with our belongings scattered across the room. During the day I could be found with a coffee mug and book in hand. I carried our only piece of furniture across our apartment– a lawn chair I had bought for a family beach vacation– in hopes of completing another book on my ever elusive summer reading list. Maybe I would even find that perfect reading nook to position the brown leather chair I dreamed of buying, I thought. Eventually, among that scattered mess, I managed to find a place I could rest. In the corner of our living room I escaped, and the words on the pages of my book were like a balm to my soul.

On that late summer day, the unsettled state of our messy apartment unit was somewhat reflective of the state of my mind and emotions. Around that time, the body cam footage of George Floyd’s murder was released and the charges were officially announced. I was desperately searching for an escape. For weeks my phone was flooded with texts and posts from those attempting to process what they were witnessing. Some responded by expressing anger, others grief, with many still trying to process what they were feeling in the midst of a summer filled with protest and debate. There were those who were refusing to watch the footage again in hopes that they might protect what peace they had and what productivity they could muster. Still some, by the grace of God, were able to publicly process all of these emotions in a manner that was collectively therapeutic for a community of Black Christians struggling to make sense of it all. As for me, I quickly realized I would find no peace. Nor would I be able to muster much productivity. Instead, I found myself trapped in a virtual space where the above statements were uttered by White Christians in such a manner that could be described as a collective sigh of relief. I say relief, because in many ways, the suspicions they had long had about what happened on May 25th had been confirmed when they watched the footage. To them, any charge or ruling that did not affirm those suspicions would be labeled the real injustice.

Internally, I was at war with my emotions. In my mind, I thought up a response to their callousness and arrogance. I began typing, ready to go to battle for the truth I knew was absent at that moment. As I was moving to press send, however, something came over me. I froze. My attention suddenly shifted, and the emotion I was expressing through my response was redirected. Instead of pressing send, I deleted the message and closed out the app. At that moment, I was reminded of the scripture I had been meditating on that summer. “But the wisdom from above is first pure, then peaceable, gentle, open to reason, full of mercy and good fruits, impartial and sincere”, I thought to myself, reflecting on the teaching found in James 3:17. By the grace of God, the alluring distraction of White Supremacy– the temptation to fixate my creative thoughts on White spaces that were sure to produce a bitter fruit in my heart– was resisted. I chose, at least in that moment, to protect what peace I had and focus my energy on the work God had called me to do. I chose to believe, as Toni Morrison believed, that we are more than a reaction to White presence.[1] That moment, and the more common moments where I failed to resist the temptation, serve as valuable lessons to me. The seductive nature of White supremacy convinces us that focusing our time and energy on spaces tightly gripped by spiritual strongholds is a better use of our time than building up the people marginalized by them. If we are not careful, we can be particularly vulnerable to this seduction— not only when we are motivated by a well-meaning desire for church unity— but when we are motivated by hatred.

A Hound of Hell

“…hatred tends to dry up the springs of creative thought in the life of the hater…” – Howard Thurman, Jesus and the Disinherited

One cannot overstate the extent to which fighting racism and White supremacy is a battle of the spirit as much as it is a battle of and against ideologies, systems, and institutions. When the beliefs and practices of racism and White supremacy become ingrained in a society and are replicated by individuals, organizations, and institutions, the consequences are far and wide. One consequence of the replication of racism and White supremacy is its tendency to entrap Black persons in a kind of captive state where hatred breeds an enslaving spirit of bitterness and hostility. In Jesus and the Disinherited, Howard Thurman names hatred as a “hound of Hell”[2] — the inception and full evolution of which takes place across a series of phases. For Thurman, hatred begins where there is an “abundance of sentimentality masquerading under the cloak of fellowship.” At this phase, contact is absent of genuine communion. This type of contact expresses an understanding that is “strikingly unsympathetic …without the healing and reinforcement of personality” (i.e humanity). At this phase, understanding is characterized by a lack of affection or apathy. Once an unsympathetic understanding is present, hatred grows into an “active functioning of ill-will” towards others that permeates the life of the individual.

This evolution of hatred describes much of the inter-ethnic contact within White Christian environments. The temptation to give into hatred is likely a part of the testimony of many Black Christians who have navigated White Christian spaces. When we reckon with their historic and insufficient witness, we are often burdened to be a prophetic voice. Many of us make the decision to devote our time in these spaces to challenging the institution in order to advocate for those who look like us. We carry with us a zeal to prove that the pursuit of racial justice and unity are integral to lives transformed by the Gospel; that the fruit of disciplines such as psychology, history, legal studies, and sociology can be gifts of common grace to the benefit of God’s people on earth.

However, for every small, half-measured step towards the breakthrough we envision comes what seems like giant leaps backwards. They come in the form of reminders that many of these spaces have little to no intention to reckon, uninterrupted, with their insufficient witness. They refuse to address the systemic and spiritual battle against racism and White supremacy. Crushing reminders of the insufficient witness of White Christianity serve as heavy burdens, stacked one by one onto our souls, and can blind us from our God-given zeal by obstructing our hope with hatred. But the replication of racism and White supremacy does not only conjure up bitterness and hostility in the hearts of Black Christians towards predominantly White Christian spaces. It attacks one of the most vital instruments we have for survival in and outside of these spaces: Black solidarity.

A part of the expected behavior of Black Christians in White Christian spaces is a rejection of the theological, cultural, and social beliefs and practices often associated with one’s Black ethno-racial identity. Oftentimes, Black Christians are given the opportunity to degrade Black theology and Black theologians, or pressured to call the Black church a sin due to their racially homogenous composition. Opportunities for such rejection— otherwise known as race-tests— are used to determine whether Black Christians are “willing to serve the interests of Whites in the space” or whether we must be “coerced into leaving the space.”[3] Race-tests reinforce a choice, as has been said to me, to be alone and be Black or to conform. Unfortunately, for varying reasons, the choice many are forced to make in order to be accepted is to suppress their ethno-racial identity. The often intended result of such cultural colonization[4] is the Black Christian rejecting their Black identity, and sometimes, rejecting the Black Christian expression[5] altogether. This rejection is most notably embodied by a rejection of Black churches, of Black theology, of Black-led social movements, and many times, of the Black Christians who are proponents of any one of them. As a result, a portion of the population of Black Christians are coerced into self-hatred and cut off from a vital lifeline for their flourishing: the shared community that exists throughout the diverse streams of the Black church.

When we fall victim to hatred, as Thurman says, our springs of creative thought— the springs to see Black people flourish— run dry. How, then, do Black Christians currently in, or coming out of, White Christian spaces maintain our hope in the face of a coercive self-hatred and of bitterness, hostility, and despair? We must break the grip of White supremacy and cling to the freedom we have in Christ. We turn to those themes in parts 2 and 3 of this series.

Tryce Prince lives in Chicago with his wife Erin and their daughter Nanyori. He is a sociologist-in-training at the University of Illinois-Chicago where he researches status hierarchy and Black authority in predominantly White spaces. Tryce also serves as a research consultant for the Carl Spain Center on Race Studies and Spiritual Action and a research assistant to the Black Midwest Initiative. He and Erin are members of Progressive Baptist Church in Chicago. Reach him on Twitter @TrycePrince