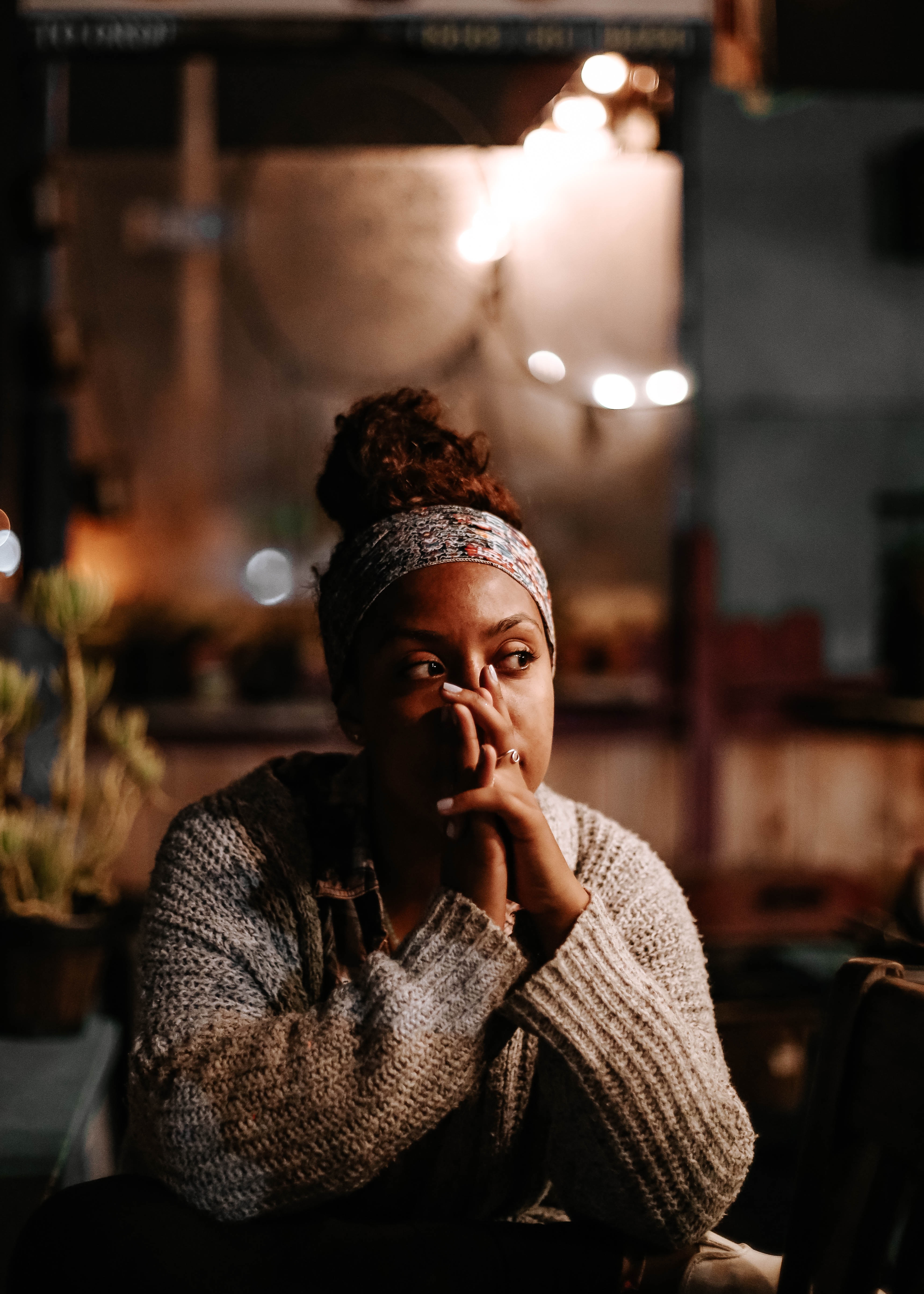 It’s another one of those comments that might get you shut down in a Black home. Children are never to ask this of adults. The reply comes swiftly: “This grown folks talking. Go outside and play somewhere.” I always chuckled at the use of “somewhere” in that sentence. It suggests any place will do even though we know full well that going some places would get your butt whupped for a whole different reason. Kids are never to be “all up in grown folks’ faces” when grown folks are talking.

But even between adults, the question isn’t always welcomed. Asking “what y’all talking ’bout” proves you’re nosey. You dibblin’ and dabblin’ in other folks’ business. “A” and “B” were having a conversation and you’re trying to “C” your way in. The answer is always, “C your way out.” Some conversations are private, intramural. They don’t need observers and eavesdroppers. As Adam and Eve learned in the garden, forbidden knowledge actually exists and consequences of being in other people’s business can be devastating.

Defining the limits of knowledge and inclusion happens at a group level, too. There are things groups of people need to talk about as groups of people. It’s their business. Intruders aren’t welcome–necessarily so, because outside groups show a remarkable ability to miss the point, inject themselves, and piss everybody off.

But what happens when it’s not outsiders trying to join the conversation but other members of the group, yet “see your way out” remains the response? How does the community process its pains, discuss its disagreements, or plan its future when some members of the community are forbidden access? How can we not only figure out what others are talking about but also what we all need to talk about but aren’t if most of our conversations are actually clique-based chatter?

And how can we have much-needed conversations if we don’t have a meeting place–virtual or real–where we gather to discuss? Is there a Mars Hill, an Areopagus, or a hall of Tyrannus where we can daily reason together? If we are clear on who we are talking to, we still need a place where we can talk. Beyond our cliques. Outside our silos. Yet within our people. Where is that for Black folks en masse? I’ve been casually trying to discover this place for the last several years without success. Do y’all know? And if so, what y’all talking about over there?

Because, beloved, we need to talk. Real talk. Not the Twitter length hot take. Not the semi-coherent thread fired off in response to the latest pop culture incident. Not the subtweet that manages to stir the pot without adding any ingredients. We need to talk talk. About serious things. About things that cause us so much pain we barely want to mention it to each other much less in mixed company. About the things we would rather revoke a person’s “Black card” over than actually listen, learn, and risk the in-group “other” might be right about. At least in part. We need to talk because we become too good at not talking.

For example, we need to talk talk about violence in our communities. To narrow the focus a little, let’s just talk about gun violence in our community. Gunfire in my neighborhood happens about as often as you go to the gas station to fill up your car. I know that’s not true in every Black community, but it is true in too many Black communities. According to the violence prevention organization Everytown, compared to White Americans, African Americans experience 10 times the gun homicides, 18 times the gun assault injuries, and nearly 3 times the fatal police shootings. In large cities like mine, African Americans make up 68% of homicide victims. Let’s put this in raw numbers, actual lives. Every day, 26 brothers and sisters are killed by guns. Every day. And every day 104 brothers and sisters experience non-fatal shooting injuries. Every. Day.

Now, when this subject comes up, the political lines and perspectives get drawn pretty quickly. Some people will focus almost entirely on the incidents of police mistreatment, brutality and killing. You can’t talk to that group until you concede all these points or points about large scale systemic issues that contribute to violence in certain neighborhoods. Others will zero in on the so-called “black on black” rates of violence. They will point to what they see as personal and cultural pathologies that lead to such high numbers of intra-group violence. As with the first group, you can’t get a hearing from this group until you concede that everything comes down to individual responsibility. This polarity exists within the Black community not just in Black-White dialogue.

These are tired lines of demarcation. They do more to stop real talk than to help it. We know the talking points already. We know when this “debate” will cease to be civil; we can feel it in our bones. We also know something else. We aren’t talking to each other and we aren’t listening. And for that reason, we also aren’t honest.

If we were going to be honest, we’d have to admit that the disease of gun violence is a peculiarly American disease. No other country has such a love affair with guns and a repeatedly proven willingness to shrug at the carnage that happens with every mass shooting, school shooting, and intimate partner violence shooting. Americans, in too high a number, love their guns more than they love their neighbors.

And if we are going to talk talk, we have to admit that African Americans are Americans. We are not exempt from this disease, this self-poisoning love of guns. We glamorize guns as much as Americans at large. Guns star in our movies, our music, and our imaginations about conflict. For all of our decrying of America and its self-destructive attachment to these weapons of mass destruction, we are America.

And if are going to talk talk, we need to admit that when it comes to gun violence something in us is very broken. Here, I need you to forget for a moment that some white people might be reading this post. We ain’t talking to them. We ain’t seeking their approval. Their opinion doesn’t matter. This is us talking. “C” your way in, brothers and sisters. We are broken broken. Broken by this country? Yes. Broken by poverty and policy? Yes. Broken in some cases by generations of struggle and trauma? Yes. Yes. Those things need to be given their full and just accounting, otherwise we would be broken and lost. I’m here for those discussions and I think that analysis is absolutely vital. But our brokenness is deeper than the circumstances and accidents of history that brought us here.

I don’t mean that only Black people are broken. All people–individuals and groups–are broken. But when we say that everyone is broken, have we said much? Have we given ourselves a chance to do anything useful when we only acknowledge the general condition to be true? No. We need to go on to describe the particular form brokenness takes in an individual or a group of people. We must delve deep enough into the patterns and tendencies the brokenness takes if we ever hope to see healing. We need to talk about our specific tragedies, our particular traumas, our unique brokenness so that we can offer specific remedies, particular analysis, and unique solutions.

Can we talk about the need for churches that will commit themselves to the intentional constructive repair of Black minds, hearts, and identities? We need churches that do soul work, deep soul work that heals the other-inflicted and self-inflicted wounds of a fundamentally anti-Black world. We need them desperately. We need churches involved in this work because no other institution has a mandate to do so. No other institution has the belief that the problem is that deep.

What y’all talking about wherever you gather to talk? Are you talking about the same old issues in the same old ways? Or have you found a place and a people with whom you can talk talk? We need to talk talk so we can heal that brokenness with the resources of a new identity and a new heart in the gospel. We need to talk talk because we got work we need to do that absolutely no other community is willing to do for us or can do for us. Gun violence is but one thing we need to talk about. There are many others.

I don’t mind if you ask me what I’m talking about. I got some things on my mind and heart. We need a place where we can talk. That’s what The Front Porch is for.

Thanks for subscribing!
Christian Living Culture/Ethnicity No Comments